Anatomy of the Eye

Anatomy of the eye 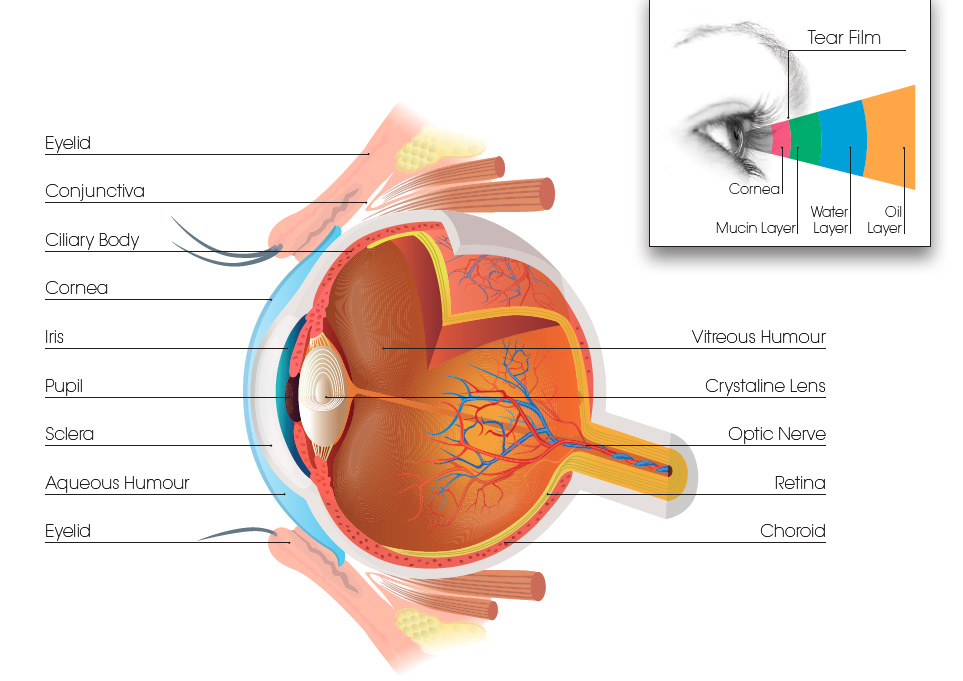 The human eye works in a similar way to a camera. Light is gathered by the cornea that acts with an internal lens to form a picture of the world on the retina, which is a light-sensitive layer lining the back of the eye. This is much like the lens system of a camera focusing an image onto film. Incoming light is controlled by the pupil, an opening within the iris that opens and closes, similar to a camera shutter. Electrical pulses are sent via the optic nerve to the brain.

The eyelids protect the front of the eye from injury and help spread the tear film over the surface of the eyes. Additionally, they contain oil glands that cover the watery layer of tears and help lessen tear evaporation.

Six extraocular muscles act to move the eyes and to keep them stable when the head moves. Four rectus muscles control the eye’s movements from right to left and up and down. Two oblique muscles rotate the eyes inward and outward. 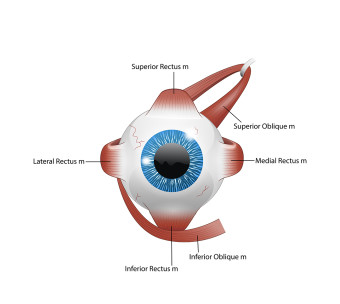 The lacrimal apparatus is responsible for tear production and drainage. The lacrimal gland continually secretes tears which moisten, lubricate, and protect the surface of the eye. Excess tears drain into small ducts through small openings on the inner aspect of the eyelids, which empty into the nasal cavity. 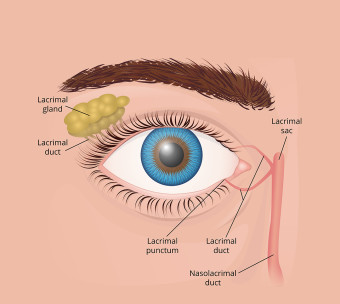 The tear film is a watery gel covering the surface of the eye. It consists of sticky mucins secreted by the conjunctiva, fluid produced by the lacrimal glands, and is capped by a thin layer of oil released from meibomian glands within the eyelids.

The cornea is the transparent, dome-shaped window covering the front of the eye, providing the eye’s focusing power. At around 0.5mm thick centrally it is made up of 5 layers: epithelium, Bowman’s membrane, stroma, Descemet’s membrane and the endothelium.

The conjunctiva is the transparent tissue that covers the outer surface of the eye. It lines the inside of the eyelids, beginning at the outer edge of the cornea, covering the visible part of the sclera.

The sclera is the white outer wall of the eye. It is a tough, fibrous tissue that extends from the cornea to the optic nerve at the back of the eye.

The iris is the coloured part of the eye. It has a round opening in the middle called the pupil. Within the iris are tiny muscles that allow it to dilate and constrict the pupil size in response to changes in light levels. Our eye colour depends on the density of the pigment cells, within the iris called melanin.

The crystalline lens is located just behind the iris. Its purpose is to fine-tune the focus of light onto the retina. The lens is encased in a bag and suspended within the eye by threads called zonules. In young people, the lens changes shape to adjust for close or distance vision, known as accommodation. With age, reading for example is made increasingly difficult as the lens gradually hardens.

The ciliary body runs around the eye just behind the iris. It produces aqueous humour, the clear fluid that fills the front of the eye. It also controls changing the shape of the crystalline lens by altering the tension of the lens zonules. When the ciliary body contracts the zonules slacken, allowing the lens to thicken and focus closer, and when looking at a distant object the ciliary body relaxes, leading to the lens becoming thinner because its zonules contract.

Aqueous humour is the fluid between the cornea and crystalline lens, which is secreted by the ciliary body. It maintains the pressure required to inflate the eye, and in addition provides nutrition for the central cornea, which has no blood supply.

The vitreous is a clear jelly that fills the middle of the eye. It is composed of mainly of water and comprises about 2/3 of the eye’s volume, giving it form and shape. The viscous properties of the vitreous allow the eye to return to its normal shape if compressed. The vitreous can be completely removed without any major impairment to the functioning of the eye.

The retina is a light-sensitive layer of tissue that lines the back of the eye. The retina creates an image projected on its surface with help of the cornea and crystalline lens, and transforms it into nerve impulses sent to the brain.

Choroid is a thin layer of tissue that is part of the middle layer of the wall of the eye, between the sclera and retina. The choriod is filled with blood vessels that bring oxygen and nutrients to the eye.

The optic nerve passes visual information from the retina to the brain. The nerve also provides an entry/exit point into the eye for the central retinal artery and central retinal vein that provide nourishment for the superficial layers of the retina.